Brand new for fall/winter, we are releasing two easy, gift-worthy hat designs: North Wind (on Ravelry) and Creekside Cables (on Ravelry). Both have been in the works for longer than I am willing to admit… but if you can see that my first prototype for North Wind was knit up during the 2010 Olympics, you’ll have an idea. 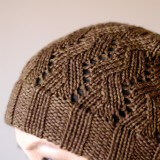 The North Wind hat was designed to be a super quick slouchy hat pattern that I could knit up in a rush and wear to Cypress Mountain for one of the snowboard events. I knew I wanted the hat to be in Canadian red and also with a zig zag pattern that reminded me of fresh snow tracks. The double-brim was inspired by Jane Richmond’s fabulous hat designs and it was perfect for keeping my ears warm on the mountain.

Originally, I knit up this hat in our Superwash Worsted. The yarn gives it great weight and the superwash gives it a bit of slink which is needed for the slouchy effect. I know a couple knitters have made it in another standard worsted weight yarn, Cascade 220, and it doesn’t slouch as much (it’s more “wooly”). Another option we tried is knitting up the hat with sock yarn held double. The version with the two strands of CashLuxe Fine is so incredibly soft and squishy. It’s the perfect way to show off a skein of sock yarn that is too nice to put on your feet.

Creekside is the smaller, quieter, but original village at Whistler Mountain and I have very fond memories of inhabiting a tiny attic crawl space at Creekside while I took a snowboard course at Whistler, nearly four years ago. Ohh, how time flies.

I have such a soft spot for this sleepy little neighborhood, I’ve long wanted to knit something to remember it. So finally, here is Creekside Cables, a quiet and minimal cabled hat pattern, with a fine column of lace eyelets that remind me of rabbit tracks. Even though the cable looks complicated, it’s actually quite easy — only three rows where stuff actually happens, the rest is all straightforward and easy peasy.

Both patterns are available on the shop site and on Ravelry:

A great big thank you to Stephannie Tallent for tech editing these two patterns for us during her own book writing/designing/knitting crunch! Stephannie and I had randomly met when we took the same hotel shuttle at Sock Summit this year… it’s serendipity at it’s finest. And another huge thanks to the fabulous knitters who helped test knit these hats, suffering through both my major and minor fails.

Join us for the SweetGeorgia Winter Knit-a-long! Our fabulous, fabulous new forum moderator, Susan, has organized a Winter KAL for us. It starts October 1 and ends January 31, 2012. Read all the details in the Ravelry forum and knit along with us… we will have prizes at the end! Come join us and knit one or both of these hats with us. Thanks so much and welcome, Susan!

Sign up to stay in the loop with all the updates, exclusive patterns,
and promotions for SweetGeorgia.

save on sweetgeorgia patterns + SOS memberships

END_OF_DOCUMENT_TOKEN_TO_BE_REPLACED

knit and crochet patterns for the cool months ahead

END_OF_DOCUMENT_TOKEN_TO_BE_REPLACED

Be inspired by the colour pairing of grey and yellow

END_OF_DOCUMENT_TOKEN_TO_BE_REPLACED

New projects to knit this spring and summer

END_OF_DOCUMENT_TOKEN_TO_BE_REPLACED

Yarn is, literally, the gift that keeps on giving

END_OF_DOCUMENT_TOKEN_TO_BE_REPLACED

Socktober wouldn't be complete without sharing a y...

END_OF_DOCUMENT_TOKEN_TO_BE_REPLACED

New knitting and crochet patterns for the autumn 2020 season

END_OF_DOCUMENT_TOKEN_TO_BE_REPLACED

Learn to Knit Your First Scarf

I have a friend who parents three kids and races a...

END_OF_DOCUMENT_TOKEN_TO_BE_REPLACED

Are you ready to knit your first sweater?

I love a good shawl as much as the next knitter, b...

END_OF_DOCUMENT_TOKEN_TO_BE_REPLACED

6 thoughts on “North Wind and Creekside”

let's make something together

Join our community of SweetGeorgia knitters and spinners, makers and crafters. You'll get weekly inspiration and updates as well as access to our free pattern bundle of eight easy-to-knit accessories patterns.

Shopping cart
close
We use cookies to improve your experience on our website. By browsing this website, you agree to our use of cookies.
More info Accept
Start typing to see products you are looking for.
Shop
Sidebar
0 Wishlist
0 items Cart
My account