It’s been nearly a month since my classes at Vogue Knitting Live and I’ve been trying to incorporate what I learned during those classes into my knitting. This, especially. At the very last minute, I was transferred into the YarnHarlot’s “Knitting for Speed & Efficiency” class and was absolutely ecstatic about it. A while ago, I saw a video of Stephanie and her “Irish Cottage Knitting” and knew… I had to learn that.

The concepts are really very straightforward. There are basically two kinds of knitters — those that knit for a living and those that don’t. We should look those those who do production knitting for tips on speed and efficiency. Generally “picking” is the most efficient way to generate a knit stitch… and so we see pickers (such as EZ and Meg Swansen) generally knitting a lot of garments in the round or garter-based lace. “Throwers” generally knit more stockinette-based lace and garments are typically worked in pieces.

A third style of knitting, “Lever Knitting”, is used by people who knit for a living. It’s the most ergonomic way to knit and allows people to knit for 8 to 10 hours a day without any repetitive strain. Lever knitting makes knitting or purling equally easy to do and the stitches are precise and even. So, lever knitters knit everything.

The most compelling part of the 6-hour lecture was hearing about the history of this style of knitting. Stephanie studied art history and brought images to demonstrate how following the industrial revolution, knitting became one of the “domestic arts”. Women were encouraged to hold their knitting needles in a “proper” and “pretty” way to show that they were upper class — that is, to keep the palms of the hands down. This is a posture which ultimately slowed down our ability to knit fast. So, we have to go back and re-learn an old pre-industrial revolution style of knitting in order to regain speed and efficiency. 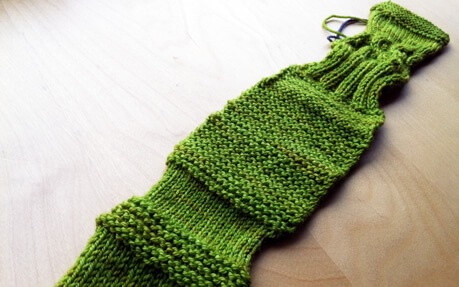 My armpit. The most useful knitting tool around. Who knew?

No matter how we knit, we all had to go back to the basics… everyone had to learn how to pick, how to throw, and how to do the “yarn held over the neck Portugese style”. Then the 3-hour afternoon session was spent entirely on lever knitting. I learned to “throw” as a kid, but I’ve been knitting this way (“lever knitting” a la HeartStrings) for a few years now. Stephanie’s method of lever knitting has a different method of yarn tensioning than on the HeartStrings site. Stephanie’s criteria for lever knitting is: one needle held stationary (either under the armpit, held in a “makkin” or knitting belt, or held like a pencil) and the yarn tensioned on the lower fingers of the right hand. Tensioning the yarn lower down on the “stupid” fingers allows the index finger and thumb (the “smart” fingers) to do much more of the sensitive manipulation of the stitches. The middle and ring fingers that are holding the yarn act more like a sewing machine shuttle, arcing back and forth to catch the tip of the needle.

This is all much easier than it sounds. So Stephanie’s suggestion was to practice daily for at least 21 to 30 days in order to develop the micro muscle movement memory that is needed. So far, I’ve been knitting relatively big things on 7 and 8 mm straights, so this method has been great and I’ve been improving there. But going back and trying to knit lace like this has been very challenging. I’m sure it’s just a time and practice factor… I hope.

If you are interested in learning to knit faster (wanna get through that stash?! I do…), I would encourage you to seek out Stephanie’s class and see first-hand how her teaching can improve your knitting speed. She also gives plenty of tips and techniques for speeding up your knitting, should you choose to stick with your picking or throwing. Also, check out the Bellwether’s post about the fastest knitters in the world and see how they knit — you’ll notice how one needle is always held stationery and the hands are making tiny movements. The hand that is tensioning the yarn does not actually drop the needle and so there is no time lost to dropping and picking up the needle again. If you feel like you need a support group, there’s even a Ravelry group for production knitters. Have any of you tried this and successfully switched to lever knitting?

And as for speed, we did a little speed check at the beginning and end of class and I’m guessing the average around the class was between 20 to 30 sts per minute. Stephanie said that lever knitters start at 60 to 80 sts per minute. You can read Eunny Jang’s old post about how she knits 75 to 80 sts per minute (but how productivity is actually achieved by always knitting as opposed to fast knitting). And the latest World’s fastest knitter appears to be Hazel Tindall… and you’ve got to see this little video.

Sign up to stay in the loop with all the updates, exclusive patterns,
and promotions for SweetGeorgia.

How to Knit Faster with Lever Knitting

Let's look at Lever Knitting, a little closer and ...

END_OF_DOCUMENT_TOKEN_TO_BE_REPLACED

Back in the spring at Vogue Knitting LIVE in Sea...

END_OF_DOCUMENT_TOKEN_TO_BE_REPLACED

I have so much to share since I've been away, trav...

END_OF_DOCUMENT_TOKEN_TO_BE_REPLACED

23 thoughts on “Knitting for Speed & Efficiency”

let's make something together

Join our community of SweetGeorgia knitters and spinners, makers and crafters. You'll get weekly inspiration and updates as well as access to our exclusive "Secret Stash" projects and more. Plus, we'll send you a free pattern bundle of eight easy-to-knit accessories patterns.